Before leaving New York last week, I told a lot of people that I’d share updates while I’m away. But I’m not sure what updates I’ll have the heart to give. Here’s the best I can do for now.

Yesterday, on the way to my newest bed, I took BART from El Cerrito to Oakland. As I stepped off the train at Fruitvale and saw the platform, the grainy video of Oscar Grant’s killing began to play in my eyes, transposed over the station as it existed yesterday afternoon.

What could I, a tourist passing through Oakland for a few days, have to say about this city that’s worth reading? What could my words or photos add to the world? What matters about Oakland isn’t whatever experiences I have between now and Wednesday, but instead that it is home to many people, and it is no longer home to Oscar Grant.

Today Timothy McGinty, the prosecutor for Cuyahoga County, Ohio, announced that a grand jury he convened declined to bring any charges against the police officer who killed Tamir Rice last year. McGinty recommended this result to the grand jury.

What matters tonight isn’t the experiences I’ve had since waking up this morning, but instead that today, like so many days before it, we reaffirmed that ours is a country and ours is a world in which the powerful can and do injure the weak, and those in power ensure that it remains so. 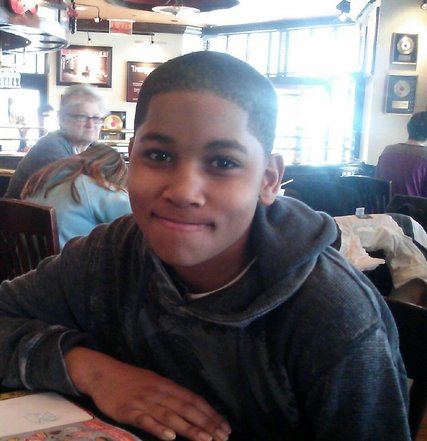 Ours is a country in which police officers regularly kill black kids, and for this service, as Ta-Nehisi Coates has has written, “Mostly they will receive pensions”:

I am writing you because this was the year you saw Eric Garner choked to death for selling cigarettes; because you know now that Renisha McBride was shot for seeking help, that John Crawford was shot down for browsing in a department store. And you have seen men in uniform drive by and murder Tamir Rice, a 12-year-old child whom they were oath-bound to protect. And you know now, if you did not before, that the police departments of your country have been endowed with the authority to destroy your body. It does not matter if the destruction is the result of an unfortunate overreaction. It does not matter if it originates in a misunderstanding. It does not matter if the destruction springs from a foolish policy. Sell cigarettes without the proper authority and your body can be destroyed. Turn into a dark stairwell and your body can be destroyed. The destroyers will rarely be held accountable. Mostly they will receive pensions.

There is nothing uniquely evil in these destroyers or even in this moment. The destroyers are merely men enforcing the whims of our country, correctly interpreting its heritage and legacy. This legacy aspires to the shackling of black bodies. It is hard to face this. But all our phrasing—race relations, racial chasm, racial justice, racial profiling, white privilege, even white supremacy—serves to obscure that racism is a visceral experience, that it dislodges brains, blocks airways, rips muscle, extracts organs, cracks bones, breaks teeth. You must never look away from this.

I don’t want to look away from this, and I don’t want to distract you from seeing it either. So I’m not sure what self-centered writing I’ll be able to do in the coming months. We’ll see. Tonight, the update I want to share is that I’m going to sleep thinking of the people we have failed, and especially the children we have killed. California isn’t a vacation spot. It’s a place where kids, especially black kids, are killed, just like Ohio is and New York is and so many other places are, because we have made them so.

“Kids Who Die” by Langston Hughes

Listen, kids who die—
Maybe, now, there will be no monument for you
Except in our hearts
Maybe your bodies’ll be lost in a swamp
Or a prison grave, or the potter’s field,
Or the rivers where you’re drowned like Leibknecht

But the day will come—
You are sure yourselves that it is coming—
When the marching feet of the masses
Will raise for you a living monument of love,
And joy, and laughter,
And black hands and white hands clasped as one,
And a song that reaches the sky—
The song of the life triumphant
Through the kids who die.

Thank you to Trish Farley and Kate Cavanagh for sharing the poem today.

The drawing of Oscar Grant at the top of the post is by Leah Chappell.